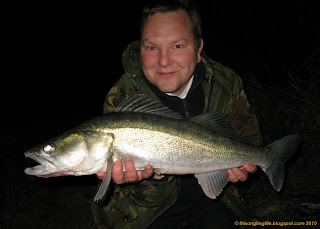 I met up with Jeff for a zander session on his stretch of the Coventry Canal, so after a quick pint at the meeting point we decided to try a new area that he'd not fished before further up the canal towards Bedworth, I wasn't fussy as it was all new area to me.

I fished my usual sliding light lead and bobbins and Jeff was using his home made floats.  My first rod had a two hook pennel rig, both singles, which soon produced a small fish of about a pound. 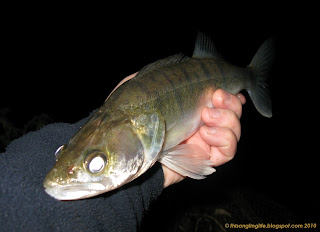 The other rod was fished with a half bait of  rudd tail or head end on one of the Mustad ultimate bass hooks, I was eager to see if they would perform better than my pennel rigs which have so far been very hit and miss in terms of successful hook ups.  Jeff has been using the bass hooks for a bit longer than me and has been having some good success with them and more importantly less deeply hooked fish (this is an aspect I'm most interested in, after a couple of deeply hooked fish lately on singles).

Meanwhile,  back at the pennel rig, I hit a run that met with a solid force, the rig sprang back minus the bait though as the hooks had dissapointingly missed their target.  I attached a fresh rudd and cast it back out near to the boat channel, more due to a fluffled cast than any other reason.  The wind had picked up a bit by now and was gusting down the canal making the bobbins swing sideways pendulum fashion, they could really do with bit of putty or blu tac to make them heaver in this situation, thus aiding stability.

Shortly, I noticed the bobbin rising up again but in a more staccato fashion, I waited a second to make sure it was still moving before lifting the rod. It met the same solid resistance as before however this time the fish was on and on the move.  It stayed deep and I could feel it was probably quite a decent fish.   Jeff realising it might be a better one had picked up the net and after a bit of a tussle she was safely landed.  My reward, this new PB, and a really solid, plump fish.

﻿﻿
A short while later we decided to move up the canal back towards the pub as the bites had dried up a bit,  Jeff was soon into a fish, landing one of around 2lb in this new spot.  He managed another one slightly bigger  after another move when the bites had dried up again, but my action was over for the night as it transpired.  Not that I was bothered, it was good just chewing the cud with Jeff about all things fishy and for me to go home with an new PB was totally unexpected.