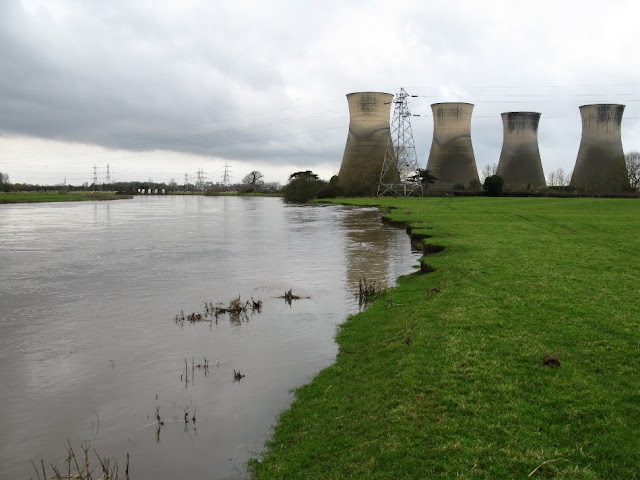 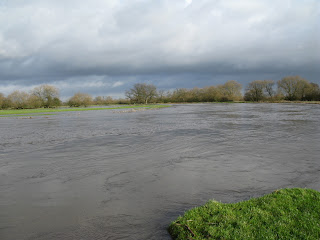 I had planned to fish for Grayling but due to the recent rainfall, and the River Dove being over the banks my decision was made for me. So off to the trent after barbel I went.After earlier checking the river near Willington, I decided that the parking was better on the other side of the river at Repton. So once I had recc'ied the bank, to make sure it was safe to wade through the stading water left by the recent flood, I hauled my tackle over and set up.

The River had an aveage temp of 6.5 deg C, I've only fished the Trent once or twice before, so it was good to try a reconnaissance session in another new area for me. River was right up to the rim, so I struggled to hold bottom even with a 6 oz lead and a 10 oz padlock ! that I had brough to use in case it reeally pushing through. I had one run on the right hand meat rod , but then wondered if it was just from a large 'weed fish' afterall.
I stayed fishing into dark but never had any takes and although I never caught any barbel, it was an enjoyable session none the less. 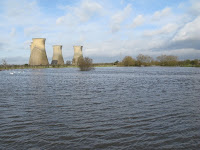 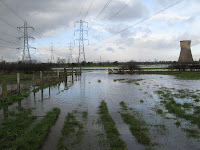 Now I'm not really what you would call a "twitcher" or anything but I enjoy observing nature when I'm out and nowadays, always try to identify birds that I see whilst fishing ( well you might as well keep busy while your blanking !).


There was a flock of birds I photographed, I have looked up waterfowl etc on the web and think they might be widgeon ? 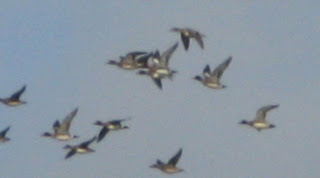 I also saw what I think was a male Sparrowhawk hunting some wood pigeon. Too far away for the camera, (approx 300 yrds) but I tracked it with my binoculars for a short while, till it disappeared behind some trees.
Again I'm no bird expert but I have looked it up on the RSPB website and I think it was most likely a male Sparrowhawk based on it colour and markings. I watched it fly across the river then perch on a fence post for approx 30 seconds, long enough for me to get the bins out and focus in on it. I saw it had a blue / slate colour back (male) and an underside of white with black stripes, that I had noticed while it was in flight. 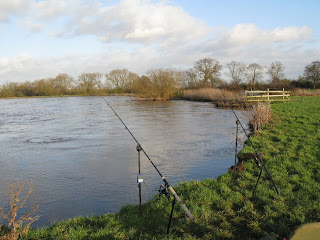 As it took off again it flew low to the ground through a small meadow between some hedgerow trees and that's when I saw three or four pigeons hurriedly take flight from the ground as it swooped over to them. I soon lost sight of it and so I don't know if it made a kill or not. I initially got excited as I thought it might have been a Peregrine Falcon at first but later realised that is highly unlikely, based on location and it's flight pattern etc.. not that a Sparrowhawk is any less worthy of course, but I would love to see a Peregrine in the wild.

Hope I can report a fish in the next update. 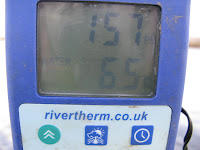 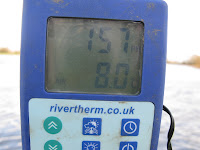 Posted by Lee Fletcher at 11:27 pm No comments: 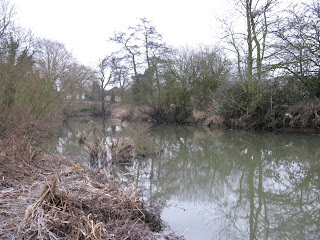 I was up nice and early before first light to go for a morning's lure fishing on the River Anker. In freezing conditions I arrived at about 7.45 am just as daylight was starting to emerge from the gloom. The banks were frozen solid but the river was of normal level, flowing and with a nice tinge of colour. 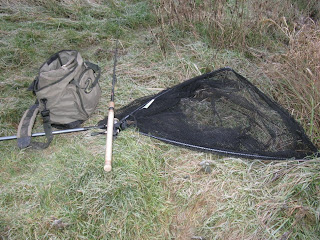 I had only brought minimal gear with me, just a rod, net and small bag with a few essential items including a box of lures and traces. I covered a number of swims up and down the river with jigs but never managed a take, and to be honest it was probably just too cold today, the air and water temp being 2.5c. The Perch and Pike were completely none responsive and must have been sulking in their lairs waiting for the temperature to rise enough for them to justify any movement. 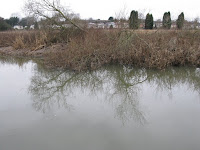 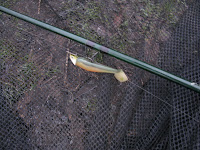 In fact it was so cold, it was the first time I have experienced water freezing my rod rings up solid, which certainly hampered my casting quite a bit.

Suffice to say I blanked, and after two and half hours fishing I went home to warm my bones again. To add insult...I somehow managed to break the end eye off my rod getting it out of the car when I got home! - maybe the carbon had gone brittle in the cold ?
Posted by Lee Fletcher at 11:28 pm No comments:

Cold December Day on the Dove 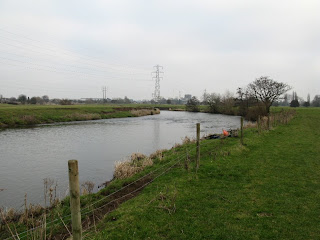 For this session I had decided to fish for Grayling due to the consistent cold weather we have been experiencing over the last few weeks.

The Dove being the venue, and on arrival to my swim I was quite surprised to find the air temperature up as much as 5 deg C, the water temp was 5.5 deg C, remaining at this all day until the around last hour of daylight when it had dropped by a degree to 4.5C 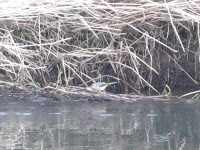 I saw a grey wagtail land next to me, but it had flown across to the opposite bank by the time my camera was ready for this shot.

For my rig I used the same tactics as my last Grayling session, a cage feeder filled with mixed breadcrumb and red maggots both dead and lives, to hopefully draw the fish in. This tactic was employed all day trying in two different pegs, but never produced any response (that I noticed any way), except for one of my last casts of the day when I had a definite pull on the tip, and on retrieval found a maggot was missing from the pair that had been placed on the hook.

Early on in the session I had walked the whole stretch to pick out any likely looking swims, this being my first visit to this part of the Dove. I checked a likely looking near bank swim, and when I cautiously peered down into the clear water as stealthily as I could, to my amazement I noticed 3 large Perch skulking in the near margin about 3 ft down, their bold black stripes clearly standing out in contrast to their surroundings as they hovered motionless. I would estimate the largest to be 2lb+ possibly even a 3lber ? The other two I could see were roughly two thirds the size, making them all worthy targets. Its difficult to really guess their size, but put it this way they were all big perch ! so rightly or wrongly I decided to wait for the onset of evening to have a go for them (this being about noon).

So at about 3:30 pm I had moved into position ready to try for one of the beauties that lay below! Within seconds of dropping the poor hapless worm into position the float had bobbed a couple of times, slid across the surface away from me and then stopped. My heart in my mouth, I waited, nothing happened for a moment or two, then finally the float twitched again, bobbed and started to slide away and under the surface again. This time I made no hesitation and struck. 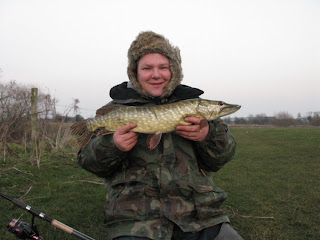 The Rod arched over as the weight of a reasonable fish loaded up the test curve. The fish powered away to my right and out toward the middle of the river, at this point I was still thinking " yes a good perch at last" when I saw the length of the Pike I was attached to flash under the surface. Damn I thought, then realised It might be a good Pike. The fish fought quite well testing the clutch on my reel and putting the rod through its paces. When it was ready for the net I desperately tried to get the net over the barbed wire fence in front of me but instead managed to get the mesh stuck on some of the barbs. After a frantic few moments I had managed to free the net again and was ready to steer the fish into it. When I peered down into the water again to begin guiding my fish in again, I was surprised to see another Pike larger than the one I was already playing following it. My guess is it was sizing it up for a meal!
I managed to bundle the pike into the net and lifted it clear of the water. It weighed 5lb 8oz and is a new PB so I was quite chuffed with it in the end. The larger Pike I estimated to be a low double as it was nearly twice the length of the fish I landed. I think there might be quite a few pike (mainly jacks I suspect)in this stretch of river, as I had seen a Pike angler land one earlier in the day not far from this swim.
I had one more cast that produced nothing, so were the perch still there ? I don't know, somehow I doubt it once the Pike had moved in. An interesting session though all in all, with some good swims located for future reference. 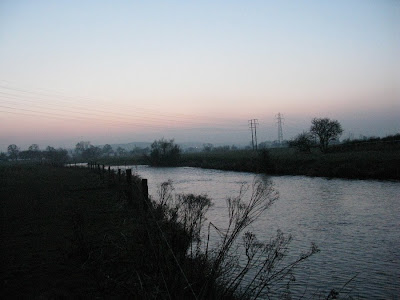 Posted by Lee Fletcher at 1:48 am No comments: