A couple of sessions on the tench lake again this week, the first on Sunday morning last from 6:00am. With not alot to report from that one except for the fact that despite it being mid May I was dressed in my full winter garb and felt colder than I did on days in January. With the north easterly wind cutting through and chilling my bones all morning keeping the temperature no greater than 8 deg C, by 11:30am I'd had enough.  With only one  liner to show for five and a half hours fishing I headed home feeling a little defeated. This water can be cruel sometimes the prevailing conditions seem to really effect it more than other waters at times.  The day before when it was slightly warmer the fish had seemingly been queueing up to be caught, one lad landing 12 fish plus a decent bream into double figures. Now the other two anglers and me on the lake, we could bearly raise a bite between us.

Wed however was completely the opposite with the temperature soaring up the scale to 23 deg C in the space of three days. Unfortunately this didn't seem to encourage the fish much and I struggled to get any interest. James was down again (same as Sunday) fishing the float in the next peg along but he struggled for bites too. I heard that some of the other anglers had found the going tough over the last few days also, dramatic temperature change is never a good thing I feel, it takes a few days of consistent weather the keep the fish on the feed, especially here.

Earlier in the day while on my lunch break from work I popped into a tackle shop to get some fresh reds and decided to splash out on a shiny white smomb to see what all the fuss was about. I've gotta say within two casts of it I was converted. It flies well, feels lighter than a spod and with no spills is perfect for any bait, except for a real stodgy mix I suppose, but that won't affect me anyway.

Full darkness had descended at about 10:00pm and despite a couple of liners I'd not had a proper run yet. I saw a fish roll just further out from the baited area and wondered if they were on the mooch in my swim now?  James came round on his was back to the carpark, we chatted about tench and the usual stuff as you do, when the left hand rod suddenly screamed off on a 'proper un' I lifted into that familiar solid curve and pumped what felt like a nice fish in towards me. The fish took a bit of line so I hoped it would be decent. Then it suddenly seemed to give up in a very bream'esk fashion I hoped I might be into one of the binlids until a reasonable tench slid over the rim of the net. We both guessed a mid six based on its size but it only went 5lb10oz which goes to show how inaccurate we all are at guessing weights.


That was it I gave it another half hour and had one more dropped take on the worm, but no more fish were banked. The worm rig taking the only customer all evening which was interesting, I expect the fish were not around my swim in any numbers and I only managed to entice the odd passing fish to show any interest as they were moving through rather than get a decent shoal to stop around and feed.  I have struggled to get into the bigger fish so far this tench season but hopefully I can turn that around in the next few sessions.
Posted by Lee Fletcher at 4:18 pm No comments:

You've had a nightmare son !!

First session on the local pit this year after tench and I was full of hope and anticipation as I drove along the motorway from work. When I arrived I found that the only other two anglers were in the peg I wanted and the next available one to the left of it.  Instead I picked a spot on the opposite bank with the wind blowing a nice ripple diagonally in to the south east side across the swim out on front of me.

With a bit of bait spodded out, cage feeders rigged helicopter style were soon sat on top of the bait - rods still set up from Sunday meaning I was good to go in no time.  While I waited for some action I made up some more hooklinks using size 14 Korum S5s. To these I added the obligatory fake red maggot up the shank covering the eye. I decided to change one of the helicopter rigs to my old faithful inline maggot feeder. The right had rod was now fishing said maggot feeder over the bait and I sat down to ring Andy while I waited. Within minutes of our conversation starting the rod was off on a stormer! I shouted to Andy on the phone now on the floor " I'm in" and played the hard fighting fish in gently making sure that the clutch was loosened off enough to avoid and mishaps. It was coming  in good as gold nothing to worry about just take your time, I turned the fish again and it dived the clutch giving a little then nothing but slack ! what !! the bloody hook had pulled.

With the rod back out I sat down to contemplate the situation, the fish hadn't been that big I told myself, you can't tell of course but I guessed no bigger than six pound (at least I  hoped). The left rod was off soon after and again a fish was gingerly played in. As it headed to my far left trying to get into the reeds along the margin I forced a turn on it, the fish seeing my point of view for a while. Then with a violent headshake it was off, the hook giving out at the bend!

Fish number three came shortly after on the maggot feeder again, this one headed up the margin to my right this time. I managed to get the fish turned and out from under the near bank tree, line sickeningly grating on branches as I did. It was now safely out in front of me  just requiring a gentle bit of coaxing into the net, when the hook pulled for no particular reason! Oh bother I said ( or something like that ) these hooks re just not working, just about stopping my self from chucking the rod in.  I searched in my bag for a different hook pattern settling on some size 10 ESP raptors instead.  The maggot feeder was off again before I had time to finish tying the new hooklink. Right just be very careful I told myself , but the fish was off before I had time to settle into the battle.

That was 4 lost fish in about 40 mins of solid action. The hooks were just that bit too small to have a fake maggot on the shank and cope with the weight of the feeder up the line, these factors must have been responsible for loosening the hook from its hold at any moment.

The maggot feeder was re rigged with the new hook pattern and within no time it was off again. The fish came in  steadily and without too much fuss I slid it over the net, easy !  Only a four but it was a relief to get one in finally.


I kicked myself for not changing the hooks sooner, but on reflection if you get one hook pull you put it down to bad luck, two or three and you start to question your tackle judgement,  by the forth !! well I was already in the process of changing the hooks by then.

Funnily enough with both rods fishing maggot feeders now, the feeding spell was over just an hour or so after it had started. And the lesson learnt, well that's plainly obvious now isn't it !
Posted by Lee Fletcher at 1:15 am 1 comment:

April turns to May ...time for a catch up

Lately I've not been out fishing as much as I usually would, due to other influences mainly ( work,  family, the dreaded DIY) but also the weather has played a big part. I just haven't been in the mood to sit enduring blanks in this cold spring we are experiencing. At this time of year I would now be in full tench mode but for one reason or another it's taking me a while to get started and in the swing of it. My usual tench water takes a good while to wake up even in a warm srping, generally two weeks after most other waters , so I havent felt like punishing myself there as yet. Reports had been a bit hit and miss so far this year so I didn't think I'd missed out too much.


I went canal zeding for a couple of hours about a two weeks ago but only managed just one small zedlet of no more than two pounds. It did take a strip of trout that I was trying out as bait for the first time though, proving it'll be a rare occurrence if nothing is either learned or confirmed on every session out on the bank. 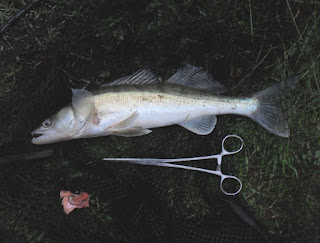 Finally I got out after my first spring tench this morning for a short 4 hour visit to a local pool where I knew I could rely on a few runs (hopefully).  The usual peg I would fish was taken on my late-ish arrival at around 8am so I headed to a swim I've never tried before and set about preparing the rods in earnest. With only 4 or 5 fishable spots on the whole pool it was shit or bust, so out went several cage feeders full of ground vitalin and hemp with a sprinkle of dead reds for good measure (silty bottom on this pool). Both rods were out and fishing within the hour and that included setting them up from scratch hook lengths and all (quite fast for me ). 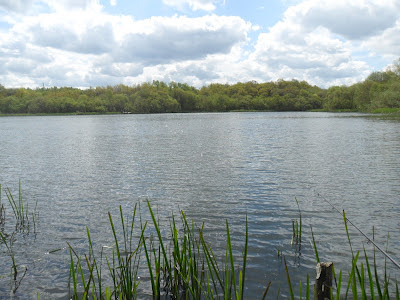 I'd expect some kind of indication after about 40 mins on here but after an hour here was none.  Doubts about the swim choice started to creep in.  Soon a bit of online scrabble on the smart phone with the wife had her accusing me of being bored with the fishing! not a bit of it.  She should know by now I could happily sit there biteless all day and still think I had a chance till the last second of the session, boredom just wouldn't get a look in.  Shortly after my carefully worded reply, not admitting any kind of defeat being on the cards, the left hand rod was off with a strange stuttering take, the line falling slack then picking up again but without registering anything on the alarm the second time ?  A fish was on though and after a slow steady fight the years first tench was in the net. Quite pleasing to have caught on my first attempt this year, something that doesn't always happen for me. Nothing massive at 4lb but its a start. 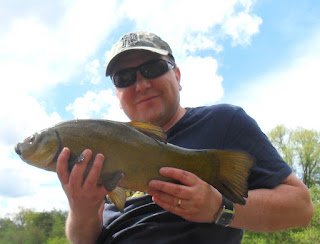 So that brings me bang up to date, I will be back at my usual tench water next session as I hear on the grapevine this evening that the fish have started to come onto the feed big style today, so I'm hoping to get in on the action pretty soon... watch this space.