PB's were a plenty at Marsh Farm on this session.  They are considered as pure, undiluted, pedigree, BRFC approved Crucians from this venue with a few going to 4lb plus.

Just knowing we would be fishing amongst these standard of fish was exciting enough in itself, and although my aim of a 3lb + Crucian was not achieved I still did OK with a lovely 2.8lb specimen.


Arriving at bang on 07:30am, Steve and myself paid for our £5 dayticket and headed for Harris Lake, choosing a peg each, as recommended by the bailiff, between no's 2 and 10.  I selected peg 8 and Steve peg 5.
I excitedly rigged up my pole and baited up with some groundbait, a mix of brown and white crumb with some crushed hemp and a touch of swim stim betaine (we later realised that groundbait was banned - oops).  I chose to fish to the length of my margin pole halfway down the near shelf at about 6 - 7 m out.
With the depth being around 5ft, I tried to let my bait just hover slightly off bottom, but later found this impossible due the wind coming across from left to right creating a fair amount of drift. This made delicate crucian fishing quite difficult, if not impossible at times. 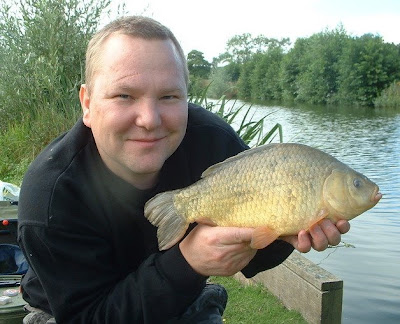 However despite the tricky side wind, I caught the first fish landing a nice Roach of about 1/2 lb, this was followed by the obligatory rudd or two.   Steve was first to score in terms of crucians, landing a nice 2.6lb specimen.   I quickly retaliated with what was to be my best and almost only crucian of the day, with an immaculate 2.8lb cracker.

Things soon got more difficult in my swim with the wind conditions worsening, I was struggling to get my float to stay in one place and could not hope to have seen any of the lightest bites unless the float tip completely buried.   This is not accurate enough in this style of fishing.  I like to have my float shotted to just a mearest blip on the surface and I quickly became very frustrated.  Steve on the other hand was in full red letter day territory, fishing a more shelterd swim, he upped his PB with almost every successive fish. 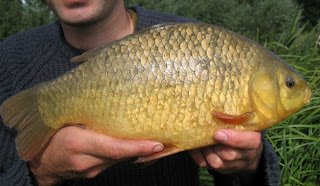 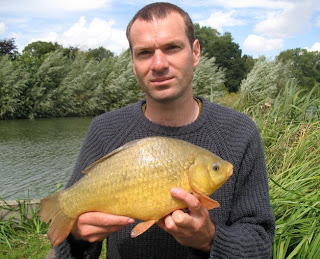 The 3.6 lb summer stunner
He then went on to catch a 3.1 only to  follow it up with a 3.6 ! The only fish to spoil the average was his last of the session, a fish that probably only scraped 2lb and wasn't even weighed !
(its funny how blase you become so quickly).

It was just fish of a life time after fish of a lifetime, and to think at the time I was actually a bit disappointed that I had only managed a 2.8!! This venue really is the theatre of dreams in Crucian fishing and they are no more difficult to catch than any other crucians I have fished for really. I am sure, and this isn't an excuse, if the wind had not caused such adverse float fishing conditions for me, I would have caught more during the morning feeding slot. 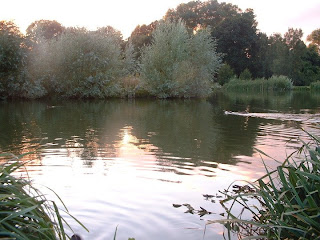 Afternoon arrived and I decided to move pegs nearer to Steve where it seemed calmer and out of the teeth of the wind.   I dropped into peg 4 and re set my float to the depth, laying on a bit this time to avoid drift. Steve by now had caught 4 crucians and a Tench of 4lb plus (that looked like it should have weighed more - it was very long but slender).
I tried my float rod first and managed a few bites but never connected to anything.
By now Steve was running out of luck too, he was still getting occasional bites but not able to hit them?


The wind had dropped right down now ironically, but this didn't really help matters as it only made the fish more finicky.  They must have felt more vulnerable without the broken water over their heads.
Bites came and went for both of us but soon hours passed without a catch between us.  I did manage to connect, then lose a Tench on the pole as it powered off up the lake at one stage.   The pole length ran out before I could stop the fish when I did react quickly enough and add another section on (something I need to work on!).

Finally around 7:20pm I hooked a crucian on the float rod that dived down to the bottom staying low.  I tried desperately to adjust the clutch to give some line but it somehow jammed and the hook pulled. I know it was definitely a crucian by the way it fought in that familar circular jag jag motion unique to these wonderfull fish. Next cast I hooked a 4lb Tench and landed it this time.  A few casts later and I managed another of 5.9oz.

Steve decided to pack up as light was fading after the sun sank below the horizon but I couldn't resist another cast I just had to land one more little golden wonder before I left the place.  I landed one fish, a smaller one of under 2lb but didn't bother to weight it.   I knew the 3lber would have to wait for another time.
So that concluded the trip and to say it was worth it is an understatement.  It's a great experience, I wouldn't say I would want to fish it too often as it would ruin the novelty, but it is nice to have been and tried it.  Saying that, I will probably want to go again in a season or two and catch a that eusive 3lber.

It is worth mentioning that hitting the bites in the evening became even difficult, and without meaning to contradict my earlier comment about these fish being no more difficult than anywhere else, I just couldn't hit any bites on the pole rig missing up to maybe 10 or 15 at least in concession.  Sometimes on the strike, the corn would be gone from the hook and other times not, whichever outcome, I never once felt the pull of a fish even slightly during this very frustrating spell.    As soon as I swapped back over to my float rod I connected with the very next bite easily!  although I lost this fish crucian as described earlier, when the clutch locked up and I completely messed it up.  I wonder if this was down to perhaps more amateurish pole fishing technique in terms of striking at bites, compared with my stronger and more honed ability and experience with a float rod?  Or whether subtle differences in the rig itself led to the fish being able to continually get away with it ? That's what attracts me to crucians - intriguing little buggers they are !
Posted by Lee Fletcher at 11:33 pm No comments: 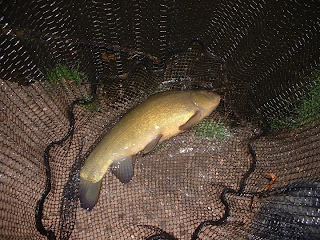 Fished Kingstanding Pool again on my margin pole. I used a different rig this time and managed to shot and balance it quite quickly. First cast brought a scrappy 1lb tench on corn, I was then pestered by some roach for a while until the first crucian of the session arrived a few casts later. 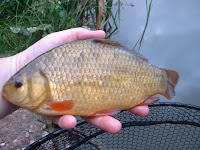 A rain shower past over and things went dead for a while until I decided to fish closer in. This started to produce some bites again and soon a couple more roach followed. I then experienced a frustrating period of missing bites that were either too finicky or lightning fast. The crucians here are particularly light feeders meaning it was sometimes difficult to tell whether that float had actually moved or my eyes had imagined it. My float had been dotted right down so it was just the merest pin prick showing on the surface, but still the crucians were able to get away with it !! On retrieval the bait had been snaffled each time leaving me another empty hook and missed chance.

I was determined to beat my tally from last visit which meant I needed to catch more than one crucian, and this was eventually achieved just before the light was fading when I finally connected with another bite and a nice hard fighting crucian was netted. 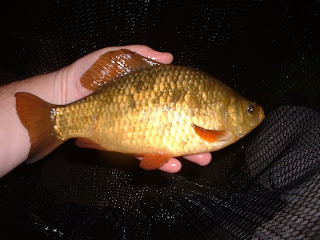 On my last cast of the session I managed to hook another (mudpig) carp that tore off across the shallow end a the pool, snapping the hook length with little effort. It was now almost dark and definatly a good cue to pack up and go home. It had been a good taster session in preperation for the visit to Marsh Farm in Surrey that Steve and myself have planned for next week.
Posted by Lee Fletcher at 11:58 pm No comments: 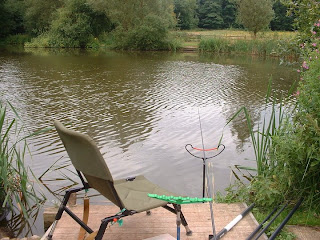 Fished Kinstanding pools near Needwood, Burton on trent. The object of this session was to refresh my technique using a pole. I have just bought a 6m margin pole for use when I'm crucian, Tench and Perch fishing.

I chose a peg along the dam wall, where the club guide book suggests the crucians like to frequent and baited it with some expo groundbait and a few hand fulls of pellet and corn. The corner swim I selected seemed to be alive with fish that were topping and sending plenty of bubbles up from the obvious feeding activity in the silt. A number of tail patterns on the surface suggested there were some carp in the swim which was pretty much confirmed by my first bite I had to a small cube of meat. The fish dived straight under a tree to my right and I was powerless to do anything on my light pole tactics. It was a fish probably at least 4 or 5lb minimum as it woke up a moment after I hooked it realised what was happening to it, and shot straight under the tree to my right, and when I had the audacity to pull back stretching to elastic and bending the pole round it smashed my 2lb hook length like coton.

I soon set up another hook length and was then landing my first fish, a small roach. A Rudd followed then a few more roach until I caught my main target in the shape of a nice palm sized beautifully formed crucian. 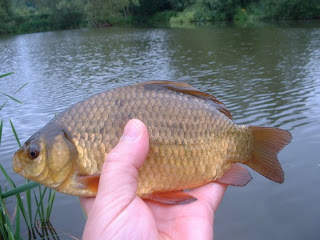 After this fish I struggled to catch although I was still getting occasional bites they had dropped right off. I was really annoyed at losing another crucian to a hook pull. Finally it was too dark to see so I packed up and went home a little disappointed that there had not been more fish caught but also feeling I had achieved the objective. It is apparent that I will need a bit more practice getting used to a pole again as I had not done so for a few years now although it shouldn't be long before I am in tune with the method again as I know I have been in the past. I aim to have one more practice session before Steve and myself embark on our summer adventure to Marsh Farm in Surrey in the hope of catching a PB (true) Crucian each.
Posted by Lee Fletcher at 9:19 pm No comments: