I had planned to fish the Dove for an evening session, but the planned stretch was crowded when I got there, well there were two other anglers fishing. As they were both near to the swim I wanted to fish I figured the fish in that area would be getting enough pressure and so decided to go to the Trent instead.

To my great disappointment I found two other cars in the car park at the Trent ! I ended up in a peg I don't normally fish for barbel but had tried for Perch here in the past. I spoke to one of the other anglers in the next peg who turned out to be from Chelmsley Wood, we spoke about local venues we both fish like the Blythe and the Fazeley canal etc and it appears we have had similar experiences on the Dove so far (i.e. struggled).

Anyway back to the fishing, I fished the usual two rods trying one on meat at first then eventually both an Pellet or Monster Crab Boilie. The left hand rod was the first to produce a bite. After leaving it to develop for a while it finally waggled away suggesting a small chub. I was trying to cast my other rod at the time and had left the baited rig in the water gathering weed. I lifted the fish out to hand as it only seemed like a small chub of a pound or so. I then got the other rod out of the water so I could deal with the Chub. In the darkness it occurred to me that the fishes shape was not right for a chub as its head was too pointed and mouth too small. 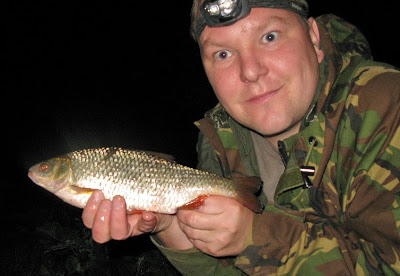 PB Roach with me doing a goon impression holding it !!


That's shaped like a Roach I thought, sure enough when I switched on my head torch it was a good Roach. I haven't seen a good roach like this for ages so I was unsure of the size, but was pleased to find it went 1lb 2oz which will be my PB as I haven't recorded one before, and from memory the biggest Roach I have ever weighed before have never pushed the needle past the 1lb mark. So that sets a nice bench mark for a river Roach for me to beat. 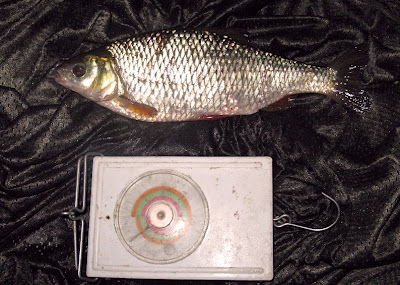 There were no more fish caught however I did have a bream late on that slipped the hook just by the net. No Barbel were seen rolling and the river seemed eerily quiet, not a fish surfaced as soon as darkness fell. Also there was no moon if that has anything to do with it I don't know as I don't follow the moon phase theroies.

Posted by Lee Fletcher at 8:57 pm No comments: 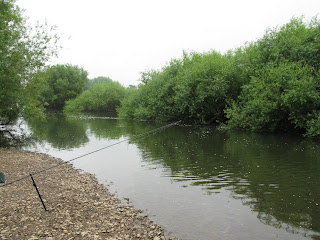 I've had a couple more sessions on the Dove during July but the only fish to grace the net so far is a chub of 4lb 4oz. I did have one bite probably from a barbel that seemed to snag me on the take. After pulling hard to try to move the fish the rig suddenly sprang back at me minus the feeder, but with everything else perfectly intact the hook was slightly bent though. 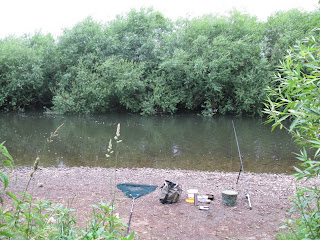 Disappointing results so far as I feel I have worked hard for my fish.
I get the impression it's all about being there on the right day or at the right time when the fish are feeding though as catches see to be a bit sporadic from the reports on the forums. However these do seem to be improving since we have had quite a bit of rain of lately. I will keep plugging away though as I need to crack this river, I think it will all suddenly come together for me if I keep at it. ( fingers crossed) 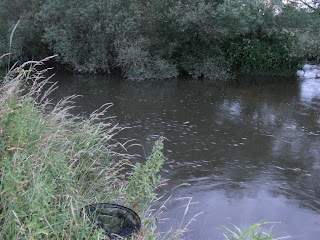 Managed to catch a couple of minnows on pellet and hooked through the mouth (we'll kind of through the jaw and head really !!) they can give a proper bite on the rod tip when the want too !! 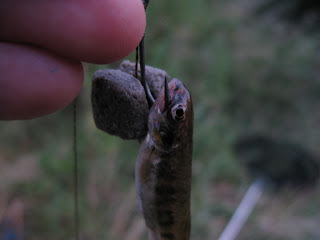 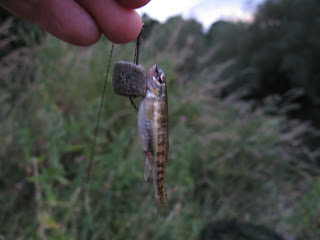 Posted by Lee Fletcher at 3:58 pm No comments:

Cheque book and pen anyone ? 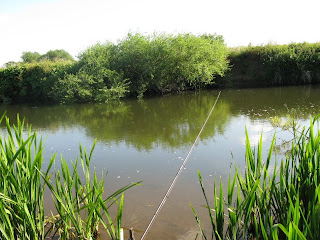 I fished the Dove for my first session this season, probably the first of many on this Wonderfull River. 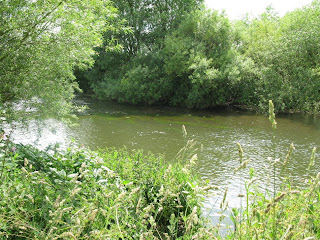 I arrived about 1:00pm and having most of the stretch to myself I baited up about three pegg with hemp and pellets. I was quite optomistic and was ready for my first Barbel of the season, however that was not to be and despite staying till gone 12 midnight I never really had any proper bites only a couple of tentative knocks that were probably from over enthusiastic minnows. 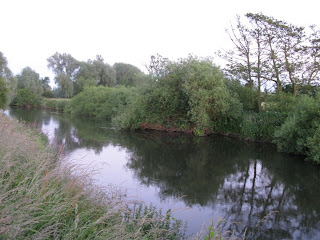 Posted by Lee Fletcher at 6:57 pm No comments: