....Not for me this time however, when I fished an after work evening session on Friday the 13th. 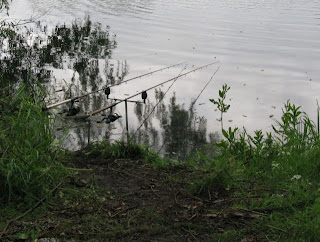 The tench lake was empty on arrival, due probably to the sporadic showers that were falling intermittently.  With the fall in temperature I was a bit concerned that the fish might be off the feed.  Keith and Danny had been down the day before and I'd not heard any news, so I presumed they'd not fared well?

I chose to fish the same swim as last time, predictable maybe, but I have unfinished business there now after the fish I lost last time.  Also the snag has been removed so I hoped I'd have more chance of landing any hooked fish.  The rods were still clipped up so I just had to get the bait spodded out and get fishing.  As I was setting the bobbin on the first rod, it ripped up to the blank signalling an indication, then settled back down again. This wasn't just the rig settling but definite signs of fish.  I raced to get the other rod set up and in the water.

Half an hour later the second rod ripped off after a few single bleeps minutes before.  The fish came in quick to the right hand bank under an overhanging tree. I tussled with the fish to keep it from snagging on any trailing branches, feeling a sickening grinding on the line for a second. Luckily it came through and was in front of me in 6 ft of water off the marginal shelf.  I thrust the net out and drew the fish up and in first time.


I had to wait two hours for the next fish, but with a dropped take and a few indications in between to keep me hopeful it was worth the wait.  This second fish came in to the right again and headed for the same tree, it was a bit more powerful and threatened to head for any snags that might lurk near the bank.  I had to drop the rod tip down into the water and heave the fish out. Thankfully this worked and again the fish was out in front of me, but I still had quite a tussle as it did a couple of powerful dives to try and break for freedom. The clutch took the strain and the fish finally succumbed and was netted.

I spoke to Keith soon after and whilst chatting to him the same rod was away again, but it was another dropped take, the strike only meeting with the weight of the feeder and not a powerful tench !  I wondered if this might be a problem with my rig set up? I read an interesting article in C.A.T. where Dan Williams talks about the same problem, putting it down to the use of short hook links. His observation is that the feeder will swing about near the head sometmes causing the hook to pull free when playing the fish.   My problem is with dropped takes so I'm not sure what was happening for me, as the hooks were coming back sharp and the bait was pushed far enough back on the hook to not be a hindrance to achieving a good hold in mouth of the fish.

My links were 12lb ESP Ghost Fluoro as I wanted a reasonably stiff link to keep them from tangling on the helicopter rigs I had been using.  However I had changed one rig over to my usual inline feeder so the need for the stifflink would be less important.  I usually use amnesia on this set up which is more supple allowing more movement of the hook and allowing it to lift up easily off the feeder and into the fishes mouth. So I wonder if the use of a stiffer short link was preventing a good hook hold as the fish took the bait and belted off, the weight of the feeder might be dragging the hook back out at some critical pressure point during the run. I will be experimenting over the next few sessions to see if I can eradicate this problem, especially considering any of the fish that take my bait could easily be a possible new pb !
Posted by Lee Fletcher at 9:59 am No comments:

This week - some ups, some downs

I returned to the tench lake this morning to pit my wits against the lakes residents again. 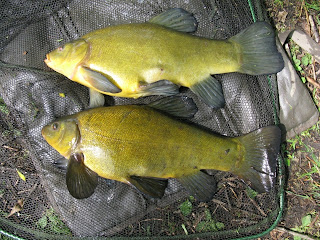 After setting up in a somewhat awkward swim, I spodded out a healthy bed of freshly cooked hemp, almost two pints of maggots and a few balls of groundbait laced with casters, corn and molasses.

With the table set I punched out the feeders, maggot aligner on the right, popped up corn on the left and sat back to contemplate what might be. I didn't have to wait  long as the maggot rod was away within half an hour of casting in.  After slipping on my arse on the way to the rod I managed to get back to my feet with rod in hand bending into a nice heavy lump that kited steadly to my left. The fish came in quickly but was reluctant to come up in the water. It hugged the bottom and felt nice and heavy. Soon it was close in and I reached for the net somewhere up the bank behind me, I stumbled around grabbing for it.

With the net now in my left hand, I was readying myself to claim the prize.  Giving the fish some side strain I got it up on the surface, a huge golden flank emerged, looking every inch a PB shaker if not  breaker of somewhere between 7 and 8lb I would estimate. Suddenly it lunged down hard and fast as they tend to do, but stupidly I'd forgotten  to check my clutch and it was set way to tight. The rod hooped over as the fish plowed down to make a break for it - the hook pinged free and the fish was lost.  I was just ever so slightly gutted as the realisation of what had just happened sank in.

The next take resulted in another hard fighting tench, this time the clutch was good and the fish was played in carefully, after a tussle trying to get it off the deck it was finally on the surface. This was a big male, very dark and lumpy, I was ready with the net, the fish not yet ready to be netted headed for a snag to my right,  I'd almost  stopped it but it managed to reach some thin wispy top twigs from a sunken tree branch.  Somehow the hook was transferred from the fish to the twig and another fish was gone.  Arrrgh.

I was pretty deflated by now and thought I'd surely lost my chance of any fish.  But after a couple of hours of  moping and cursing my luck, I was  suddenly fighting another tench and this time it was actually drawn all the way over the rim of the net for once. But before I had time to think, the other rod was away and I was now faced with the problem of how to get a second fish in with one already in the net.  I somehow scooped the second fish in without the first escaping. I'd quickly gone from losing two fish, to havng two in the same net in what was a very hectic couple of minutes.

These were both females of similar size, I weighed the biggest at 5lb the other was a good four I'd say. The next feeding spell came about half an hour later, when the next shoal came through my swim and brought two males to my net, again both at the same time.


My morning session was up soon after and it was time to pack up and go home.  There were still some indications happening on the rods, so maybe there would have been a few more fish, who knows?
I can't wait to get back on the lake for an evening session during the week.

For my first session of the week, I fished a new water to try for some crucians. After checking out the likely swims I picked one and started setting up the float rod.  I pulled out the centrepin as I'd been waiting for an opportune moment to put it to use. Unfortunately I'd left 6lb line on it, hardly light tactics conducive to crucian fishing. Luckily my margin pole saved the day, so i attached a made up rig and fished as close in as I could. After a few hours I ended up with a small net full of roach bream and hybrids, no crucians but it was a pleasant enough session all the same in nice surroundings, I vowed to return in a months time when there would more chance of them feeding consistently. 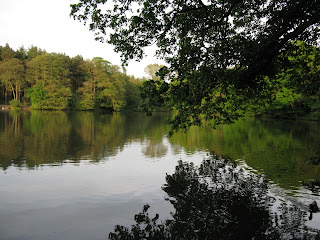 Posted by Lee Fletcher at 11:56 pm No comments:

Back on the tinca trail ...

After a few weeks without much fishing time, I managed to get back out on the bank this morning.
So back to the tench lake it was to try and net my first of the year. 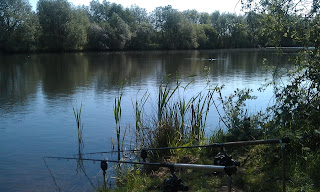 I arrived at about 6:30am with the weather sunny but cool in the strong easterly wind, making it a bit uncomfortable in my position tucked in the shade.

Bites were hard to come by, but I managed to induce a take late on in the morning resulting in this very welcome 5lber.  The fish was pretty flat spawn wise, but I would expect they will be mooching around looking for suitable protein rich food to fuel their egg production by now.  So they should pack on more weight in the coming weeks. 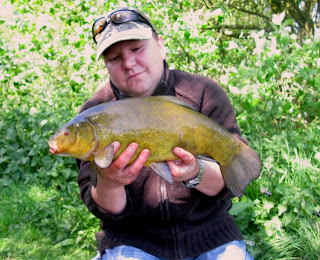 I packed up around lunch time after one more dropped take, both that and the landed fish coming on lob tails. The maggot and particle rod didn't produce, except for a few bleeps that I put down to wind action or maybe even undertow on the first few feet of line off the rod tip.   I always try to make sure my lines are pinned down as much as possible to avoid annoying liners. That way the alarm only bleeps to a taking fish (well sometimes). 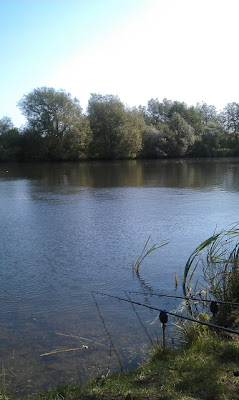 I'm not sure the lakes fully awake yet and I suspect there's been a bit of a false dawn with the high pressure and warm temperatures so far this spring. The night time temperatures are still down to low singles so it might be a week or two before good multiple catches are likely. The tench in this lake are always late in emerging from their winter hibernation, so there's plenty of time yet, in fact this is the earliest in the year I've ever caught a tench from it so far, although I know others have had fish here and there during April.  I think it'll switch on pretty soon though, and then it's a race to fill your boots and beat the weed growth before the best swims become a pain to fish.
Posted by Lee Fletcher at 9:21 pm 3 comments: