I made a quick visit back to the carp lake again last Sunday. The baiting didn't seem to work this time although the fish were still active and were seen drifting over the clear gravel area near the reed line.  I used two rods this time, bringing my 2.2lb TC floodwater barbel rod into action.  One rod near the reeds the other out to a patch of gravel in the middle of the bay, both sporting popped up baits. 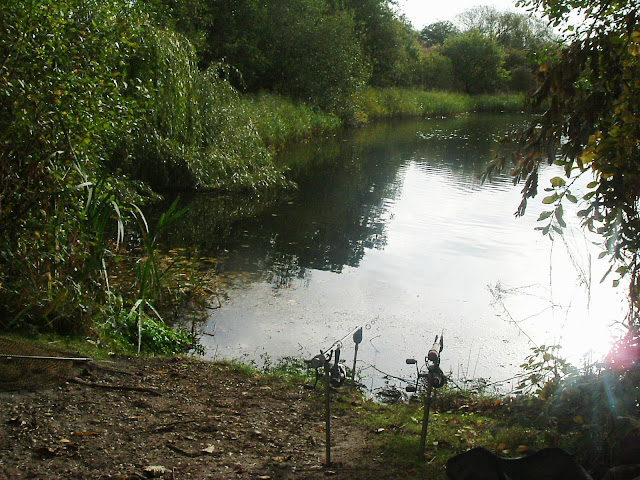 The lake was a bit busier this week so I couldn't bait any other pegs nearby as they were all taken. So sticking it out in one peg again, I hoped the fish would find my pop ups of interest, they didn't, well not in the four hours fishing time I had anyway.  I think a whole day spent in the swim would give me a good chance of a pick up though, but I'm acutely aware of time running out with the Carp in this lake.  I will probably have turn to plan B and fish a match type commercial if I'm going to bag myself a carp for the challenge before the onset of winter.  I'm kicking myself that I didn't try a bit earlier in the year instead of concetrating on zander a bit too early.  I'm not really that interested in carp fishing through the winter, but I will probably be back in the spring to try again as there are some stunning fish in the lake.
Posted by Lee Fletcher at 12:52 pm 1 comment: