I headed for the River Dove this weekend for a couple of short sessions after recently renewing my ticket.
Fri evenings session saw me head for a stretch where I hoped I might be able to coax some fish into feeding on hemp and caster close in to the margin. On the way to the swim I stumbled across this Puffball in the middle of the field.  At first I thought it was a football as I approached, until I got closer and realised what it was, strangely it now looked like something entirley different. 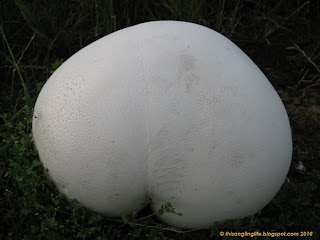 Life's Peachy !
The session was only short in the end and pretty uneventful with nothing in the first hour before sunset.  Then the rain started and was soon hammering down.  With no brolly, I just couldn't get into the fishing so packed up earlier than I'd planned to stay out.
Sunday turned out a bit better and arriving at about 6:30am, I had a little walk to get to my chosen swim.  After the bait had been dropperd in I prepared the rig and waited to see if any fish would feed.  It didn't take long as within ten minutes there was a thick shoal of Chub greedily burrowing into the gravel after the hemp and caster.  Flashes of silvery flanks, some decent fish too, were clearly visible without the need for any polarised glasses.  I had also baited another swim a couple of pegs downstream, so went to check if fish were present before making any casts. 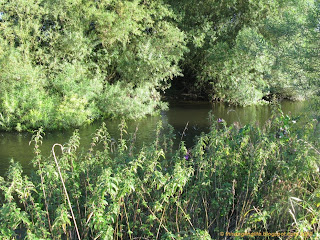 This swim had fish feeding over a small patch of clear gravel the size of small round garden table just outside of a crease between the fast water in the calmer flow.  I decided to head back to the first swim and start there however.  The first cast was made with the feeder hitting the trailing branches of some overhanging trees, luckily I got away with it and the rig landed in the perfect spot.  After a few tentative plucks however there was no pull round as I'd hoped.  I recast but had the same results but after a while I could see the chub shoal were now a little further down stream. 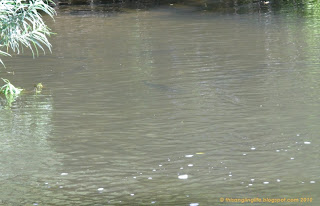 I thought there might be Barbel down there in amongst them although I couldn't make any golden flanks out in the pack of Chub.  I made a cast a rods length or so further down stream and within a minute I'd hooked a  2.5 lb chub.  I followed up with this 3lber that ripped the rod almost out of the rest ! 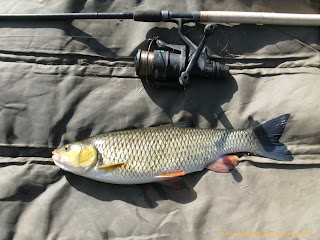 A tentative bite followed, the culprit a large Bream of maybe 6lb, I had it almost up to the net but found it really hard to move in the strong flow. The fish used its wide flank to broadside in the current so it was like trying to fight a canoe paddle working against you.  The fish was nearly upstream  enough for me position the net downstream of it, allowing it to sort of fall into the waiting net. Suddenly it flipped out and turned side on again into the current.  The pressure pinged the hook free, the rig flying back into the hawthorn bush upstream (why are they always hawthorns !).
That was the last of the fish,  I had a few more casts and tried a further few in the downstream swim, but had to leave shortly after when time ran out ending my morning session.
On the way back to the car I spotted a couple of Barbel holding station in a marginal swim about 2 feet deep. I reluctantly resisted the urge to set the rod back up as I was already a few 'last casts' over the time I'd promised to start heading home.
Posted by Lee Fletcher at 12:52 am No comments:

Drawn to the pool again.. 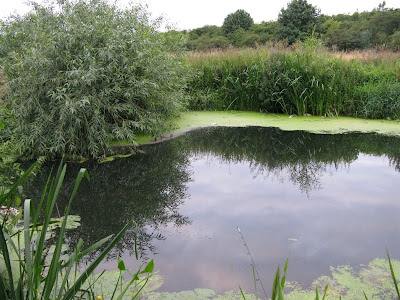 I headed out early on Sunday morning, well 5:30am is early enough for me. The morning was misty and overcast on arrival and looked perfect for a perch or two.  The float was set and cast against the raft of duckweed gathered by the overhanging branches of the tree opposite.  The worm soon attracted attention from a small perch.


My gaze was soon drawn to a large bow wave that rocked the river, with very little flow it was more noticeable because of the flat calm surface.  I was aware that something quite big was in the margin to my immediate left and heading toward me.  The unseen thing moved closer, there were masses of bubbles moving forwards underneath my rod, then past me and to the right of my swim.
It was an eerie experience but I realised quickly what it was.  I grabbed the camera and rushed quietly round to the next peg to see if I could catch the otter surfacing.  My bumbling movements blatantly obvious to the shy and secretive creature as it had completely disappeared.  My first encounter with one of Britain's once rare and elusive mammals.  Now not so rare but still quite elusive, as an wildlife lover and angler, I couldn't help having mixed feelings about the encounter.
The top pool beckoned, so I headed up there to see if I could tempt any more Silver Bream.  Another string of perch followed with this 8oz fish the best of them. 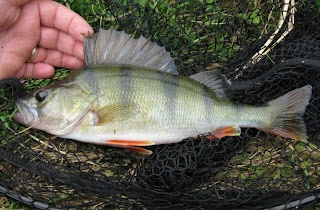 I also added to my list of species from this pool with some Bleak and the tiniest Minnow I've ever caught on rod and line, bringing the tally to 7 different species so far.  The Silver Bream didn't show this time. 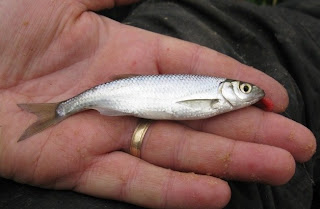 Bleak (but not in appearance) 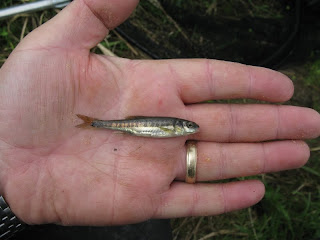 A 'minnow' Minnow
Posted by Lee Fletcher at 12:57 am No comments:

A session after work tonight resulted in a blank. The nearest I came to a fish was the couple of sharp chub taps early on in the session.

The river was very clear and low but there were plenty of fish topping up until dark.

It was nice to be at the river again, despite a blank. 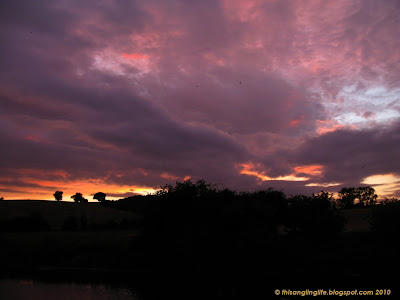 Here's a tune I thought about while I was sitting there, just waiting for a bite, looking at the sky and watching the martins swoop for insects. 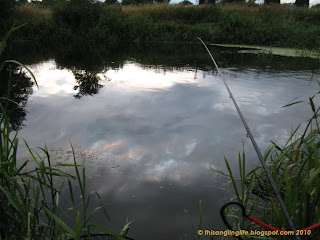 I'm having a bit of a fishing bonanza this weekend while the wife and mother in law have taken the kids to her caravan.  :)

I spent the late afternoon into evening fishing the lovely pool on a local river again. This time the aim was to fish caster in the feeder and see what turned up.  I'd really hoped to get some chub but that was not to be, in the end it turned out even better really.

First came another procession of Perch like this one... 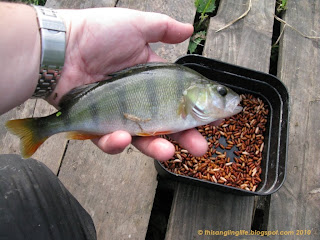 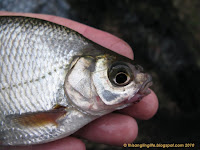 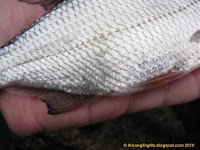 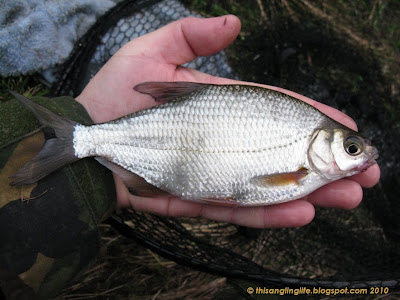 A lovely looking little fish, not massive just a few ounces maybe 3oz.  My scales are way too over gunned to to give an accurate reading.

I continued fishing and caught another ... 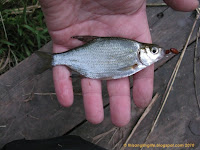 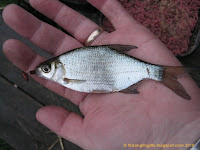 and another !
That was to be my lot as the perch started making another appearance before darkness fell.  The last few casts finished up with some gudgeon for good measure before I called it a night happy with my little haul of silvers.
That's another species ticked off the list. 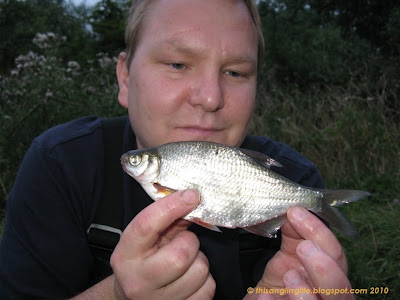 The Silver Bream (Abramis bjoerkna or Blicca bjoerkna)
Silver Bream Identification Ref: (Jeff Hatt / www.idlersquest.blogspot.com 2009)
Thanks Jeff, I would have assumed it a skimmer or hybrid if I hadn't read your posts on the subject previously.
Posted by Lee Fletcher at 1:23 am 2 comments: