Not much to report for this year as yet, I've been out on three mornings after pike and landed one little pikelet that wasn't much bigger than the bait I was using!

I've tried the canal and a local pit twice but that has not produced as much as a run yet. I'm looking forward to the time when I can arrive after work just before dusk, and be able to get in a few mid week sessions which shouldn't be too long away now.

On the first canal session I endured icy conditions from dawn till just before lunchtime and at one point the float was trapped by forming ice in what was the only ice free patch when I arrived.

Needless to say I suffered a blank that morning and had to pack down early to avoid a break off had I received a pick up.

This week however conditions were slightly improved except for the extreme westerly winds blasting along the canal that nearly blew the rods off their rests and me off my feet. The wind creating 4 " high waves to form along the canal more akin to those seen on a vast lake than on a narrow channel of shallow water.


The windy conditions didn't put off this greedy little chap trying to swallow a mackerel tail, which saved another blank at least. 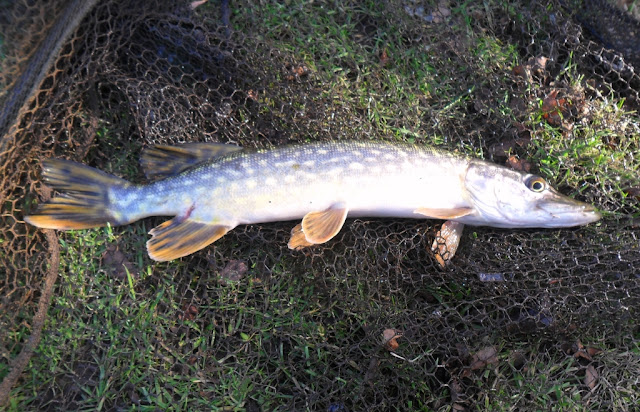 My visits to the local pit to try for some of the big girls that reside in its waters has been a futile effort so far.   I know they're in there I just haven't found them in feeding mood yet. An afternoon to evening session might be a better bet as they haven't seemed interested in the early mornings so far.  I'm watching the nights draw out slowly and surely and as Keith recently mentioned in his latest post, it won't be long till I can fish there after work for a hour or two at least.

So 2011 closes and we're finally into the long awaited Olympic year of 2012. Shame fishing won't be featured as an event, as Britain might have a good chance of securing gold based on our history of producing world champions in a fair few forms of the sport.

Perch..
My year has been quite productive really and I've broken a few PB's along the way. Some of them without really trying like the pike I caught at Blenheim Palace in September, but then some of them are the fruits of years of trying, failing then finally unlocking the secrets that result in the fish of your dreams.  The perch is a fish that I have only been  targeting seriously for a few years but in that time I've had some modest success before finally exceeding my target of 2lb and then following it up with a stunning 3lb'er a few days later as part of a four fish catch. To see fish of that size slide over the rim of your net is a site to behold and one I don't think I will ever tire of.


Then of course there was the capture of a new barbel pb in July, a target species that brought me back to fishing in the first place nearly 10 years ago.  This was a time when I really started to learn how to fish and then went on to catch my first double a few years later. This is something every budding barbel angler dreams about of course, but to then eventually catch what may be a fish of a lifetime for me is truly an incredible feeling. Of course this means there will now be the increased pressure I will inevitably inflict on my self to push those numbers up further still, but if I never achieve anything better, I will still feel happy and privileged to have held such a creature in my hands.   I don't tend to fish for barbel as often as I used to these days because of spreading my time in various ways in pursuit of other species, but weirdly I've found this has only helped my barbel fishing results when I do target them.  Maybe it's because I used to get too hung up on my tactics, tackle bait, etc etc. Now I just fish more simply and more importantly with total confidence in my methods, which can only be gained from going through all those difficult early years of struggle whilst on the learning curve.


If you happen to follow my posts regularly you will know that Zander have taken up quite a bit of my time over the last few years and I have quickly grown to love these strange and fascinating beasts. There is always something  mysterious and intriguing about targeting these fish that I never seem to tire of.  90 percent of my zed experience so far has been fishing on the local canals, which stands to reason as I live smack bang in the middle of miles of the canal system thanks to the legacy of our once empire building industrial past here in the midlands.  I would of course love to spend more time fishing on rivers like the Severn hunting down a nice big river double, but having a young family and wife to obey look after, my time is usually limited only to short sessions.  I hope to get in a few more evenings after them in the coming year on rivers like the Trent and Severn though if time allows.


There are quite a few lakes in the midlands that hold them, indeed this is how I managed to catch my current best but I don't think I will be content until I have a river double ticked off the list. Why a river fish should command more kudos to my mind is simply down to the skill involved in tracking down and then enticing one to feed on your bait in what is literally miles of wild river. They will only be in that stretch because they want to be and not artificially stocked unable to escape of their free will. Catch yourself a river double and it's truly a natural wild fish grown by natures own hand.  Alien species it may be, but then so are carp and even some of our barbel stocks in a few well known non east flowing rivers. We may as well accept the fact that they are here to stay and stop the persecution of what is a wonderful fish to target and for us to have adopted into a 'multicultural' England.

I read Mark Barrett's article in this months CAT (Jan 2012) with interest and whilst I agree with most of what he said, I found his advise against the use of small section baits and single hook tactics for zander a little short sighted. He is coming from a situation where he targets only large double figure zeds on vast rivers or drains and we'll fair play to him I say, but if like me you usually target smaller single figure fish such as inhabit the midlands canal system, then a single hook rig sporting a roach head or tail section goes down very well with the local zander population thankyou very much.  I have never deep hooked a fish this way like I have a couple of times using traditional snap tackle on larger whole fish baits. There is no point hoping a big double will come along just because you're fishing with bigger baits on a canal,  it will be totally futile - there are just too few really big fish and just too many smaller 'shoalies' to get through to even bother trying. The only way to get yourself a good fish on the canal is to play the numbers game and hope one comes along eventually in my opinion.  However I totally agree with Mark that there's absolutely no reason not to use a wire trace, so don't worry about zander being tackle shy, they are definitely not and I've caught plenty to be able to testify to this. Just avoid sudden changes in resistance, so bigger weights can be used on a good sliding ledger rig or even a float ledger with the bait laid on the deck works a treat on the canal. 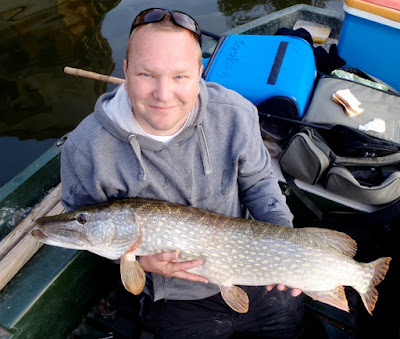 Finally to  old exos lucious.  I have only been seriously targeting them since this year and my pb is now 18lb 10oz, not too bad but when you consider of all the pike I have caught in recent times I have only caught a handful whilst actually targeting them.  Luckily this pb was on one of those occasions on the trip down to Blenheim Palace in September for Keith's 40th. With Jeff Hatt handling the net and an audience of my fellow bloggers surrounding me able to witness first hand the epic battle, then the eventual capture of my largest fish to date. A surprise fish indeed and totally unexpected. Jeff didn't fair too badly either landing his pb 3lb perch from our little vessel out in the lake.
I will be on a bit of a quest for a twenty into the new year as I am finding pike to be a really enjoyable and an obliging fish to target especially in these cold winter months. 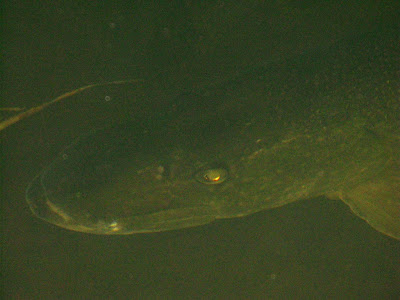 All in the challenge..

Finally the bloggers percentage points challenge this year was an interesting aspect to my angling year. I enjoyed achieving some fairly good results although my ultimate 7th position was a little disappointing. This was my own fault though as I spent too long in the the middle part of the year fishing for fun, after barbel and zander etc when I should have been building points after carp,  rudd and dace. I did finish with two top spots for species though with my barbel and pike captures, and a close second position with zander so not all bad results.  My problem was I just didn't get round to ticking enough species off the list. (excuses excuses....)

Well done to all the others though especially Keith (Terry Lampard ) Jobling who completely stormed it by obliterating everyone in his wake. With Jeff and Joe taking second and third spots respectively with some good tactical point building.  Not sure if I would do it again in the same way, but I might be tempted to a top four species challenge next time.  Leaving you to concentrate on only your favourite targets instead of worrying about the species your less interested in or indeed have good access to.