Since the last post I've been out a few times and although I've caught fish, there has been nothing too exciting to report.  I'm also finding it difficult keeping a focus on the challenge points.  I still have a few species to attempt yet which should not be a problem in catching them but I'm strugling to get motivated for them.  I'm also conscious that time's slipping away for a some of the summer species especially eels and catfish also crucians and big rudd. I will have to get my act together if I'm going to try to claw a few more points back on the board.

I'm still itching to catch a river zander and my recent attempts on the trent have been fruitless although I did seem to have a fish pick up the bait on my last river session. Winding down  to feel for the fish,  I felt nothing!  This is an area of the river where they are more of a rumour than a fact, and hence not exactly prolific, so I shall probably try some more likely areas as we head towards the Autumn to give myself a fighting chance at least. 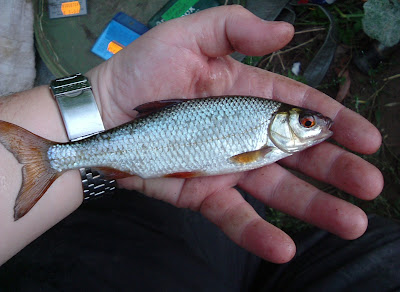 I have also been trotting for roach and bleak, which kept me occupied for a couple of hours building up a fresh stock of deadbaits and quietly hoping for a bigger sample of roach - although one never came I was really enjoying trotting a line in the upper layers of a deep 10 ft stretch just before dusk, watching fish topping all around and competing for my regular introduction of casters. Some of the roach I saw were certainly pushing the pound mark, however I could only manage a string of their smaller brethren like this one above. There were some monster bleak too.

Having not caught a zed for a while I popped down the Birmingham Fazeley canal for some easy gratification.   I found some moored boats in my first choice of swim and from my position near the bow end of the furthest boat, I was still able to cast to the far bank trees where there would certainly be some zander lurking, 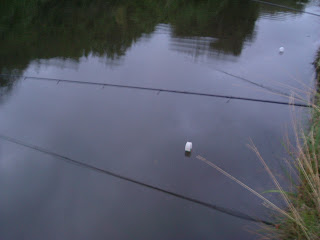 My home made bobbins are set to sit just on the waters surface to help stop them swaying in the wind, I find it so much easier watching two of these together, rather than two floats along the far bank.  I can get straight onto the bites, sometimes setting the hook as the bobbin is still rising towards the rod blank.  With a float set up I have had more deep hooking issues than with this method, although it is very important to keep a taught line when using a ledger rig so that the take is registered straight away. The bobbin doesn't always rise up very far, in fact any movement can be a taking fish. It's harder to explain than to see in real life, but you soon learn to tell the difference between a gust of wind moving them and movement by a fish. The bobbin may only jerk or vibrate which in my experience will be a fish picking up the bait. You should treat it as a take and don't wait for it to develop further, but wind down and feel for the fish then strike it.  If the bobbin is moved by the wind it will just sway from side to side and settle back to it's starting position. Of course on most takes the bobbin will rise straight up to the rod confidenltly, making these pretty unmissable.

I usually give it no more than half an hour before moving to the next area as the fish will generally take the bait within 10 minutes or so if they are there or in feeding mode.  It was soon time to move on so I decided to head for the next patch of trees about a 100 yards down the tow path.  Gathering up my gear, as I pulled in the second rod I noticed that the roach dead bait had some tell tale slash marks in its flank.  Oh well at least I could come back and try here later if I had no success further down.

The rods were straight out in the second swim, it took literally 10 minutes before the left hand rod was away the bobbin dancing a jittery dance towards the rod.  I hooked into a solid feeling fish, zander tend to have about 30 seconds of strong fight in em before giving up and surfacing before reverting to some hectic head shaking in an attempt to shed the hook. Sometimes  it works too -  as I found out when this one shed the hook as I drew it towards the net !
I soon had another take on the same rod in the same spot, again this one shed the hook.  It was third time lucky before I got one in, although it fought harder than the previous two  even taking a little line before I netted it.  I checked the single hook which was still sharp the fish being hooked clean in the scissors, so I was happy to re bait and cast back out to the spot.

I had fish number two on the bank shortly after,  the biggest of the night but still only about the 3lb bracket.  It was interesting that all the fish came from a small gap at the end of the trees, any cast made by the other rod was ignored.  This might be explained by the theory about these fish packing into a tight shoals all huddled together. A cast made anywhere else nearby, and you would think there were no zander to be found !

The final take of the night came about 11 o'clock from the same spot again, this fish slipped the hook again, such is the fate of a zander angler sometimes.  I don't like to use trebles as they just make life too difficult especially with these smaller canal fish. You could argue that I would land more fish with them maybe, but when I started out zander fishing a few seasons back  I still lost fish on trebles anyway, and got in some right old trouble with deep hooking and trebles getting caught up in the net.  You get none of that problem with a single hook.  There must be the perfect single hook out there for my style of fishing I'm sure, one that will never lose me a fish, but as yet I haven't found it.  For now I will have to hope my luck holds out if I ever hook into that monster zed I'm waiting for !

After a hectic morning cramming all the last minute bits in the car, I finally dropped off my kids at Mom and Dads and headed to Harvington's Anchor Meadow to meet up with the other midlands bloggers.

I finally arrived about 3pm and after a little hiccup in finding the campsite I eventually met Steve and Gary setting up their camp. I ditched the car and headed to the river to find the rest of the bloggers already fishing with a few  reports of small barbel and chub landed so far.

Not long after I'd arrived Andy managed to catch a 6lb Pike then followed it up shortly after with this nice 12lber.

I set up my tent....well it set itself up really.  I'd bought a new argos pop up job, which sprang out of the bag and was all ready to peg down. Well worth the £20 and very snug too, but I think 2 man is stretching it  a bit though, more like one & a half man, but being a short arse I fitted it a treat.


The fishing was pretty slow for all and I found it hard to get motivated once the cans of beer were flowing, in fact I was just as happy chinwagging with the others rather than wet a line.  My plan was to fish for Barbel and zander from evening so after a few hours I'd just caught a few bleak ready for the zed fishing later.

Keith, who'd arrived a little while after me suggested that we venture across the weir to the pub, so off came the shoes and socks and we waded across.
In the pub the landlord was not the most welcoming of sorts, and after two quick pints laced with strong hints to basically just go away from the owner, we left him to ponder his pretentious and no doubt overpriced menus whilst waiting for his empty covers to be filled ( lol), .. what a tosser.


We crossed back over the weir to find that Joe Chatterton had turned up too. After we'd all introduced ourselves, I decided to head off to get ready for the evenings fishing.

I fished a barbel and a zed rod but the only action after an hour was this small bream. 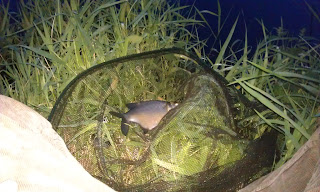 After a while I headed back over to Danny and Andy's camp on the point of the island so I could get some food cooked. David was in the next swim and had a nice BBQ going, he kindly let me use it to rustle up a sausage sandwich as I'd managed to bring an empty gas bottle for my stove .. doh!  After eating and more drinking I never made it back to my swim, in fact my fishing for the weekend finished there. I ended up sinking a few more cans and chatting with the lads before heading to my tent about 1:00 am (I think?)

I woke about 6:00 and headed back over to the lads but never managed to get the rods back out.  It was soon time for breakfast so I pooled my resources together with Danny and Andy who cooked up a breakfast fit for a king on their cookers, washed down with plenty of tea.  Sometime during the morning Dave caught a little Barbel, the only one I saw all weekend, then we all slowly started packing up and heading home except of course for Jeff whose better half was meeting up with him to stay for a few more days.

It was a great weekend, not for all the fish caught of course but certainly for the craic and the chance to meet up with all the lads. I'll look forward to the next one, and maybe I'll even get some fishing done as well ?
Posted by Lee Fletcher at 11:23 pm 3 comments: