Fished the Fleam pool at Burton on Trent on my new Burton mutual AA ticket.
A nice little pool, but just caught a small bream & perch. It's an old silty pool with probably a few nice fish in it, but I doub't I will have the time to fish it much, depends how long I keep the Burton ticket going - I might just fish it now and again in the closed season?
I also had a look at the Dove while I was there which is a few hundred yards from the pool, now this looked very nice and I can't wait for the river season to start now so I can get on there. Posted by Lee Fletcher at 9:19 pm No comments:

After a 22yr wait I have finally achieved a long held dream of beating my Tench PB, and what a way to beat it, at one of my favorite lakes completely obliterating the old one by over 2lb !
Those numbers are now up from 5lb 3oz to a very respectable 7lb 5oz .  What a fish! I never dreamed I'd beat it by such a leap and especially from this lake, which makes it all the more satisfying.
It's the excitement and adrenaline rush when something like this happens that is hard to explain to a none angler, but its what keeps us coming back for more time and time again.

I also managed to catch two more 3lbers (shown below) and lost another good fish that fell off the hook soon after striking into it.   All the landed fish were females and didn't look to have spawned yet either, especially the Big Girl as she had eggs protruding from her vent slightly. 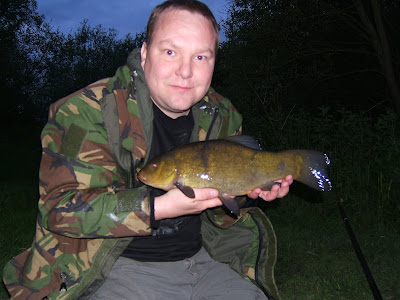 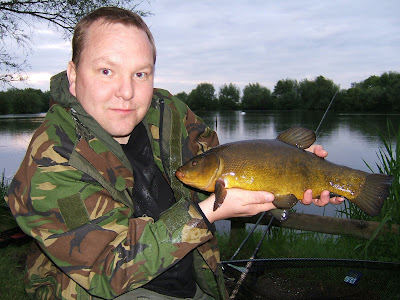 Tench lake again today & this time I fished an evening session after work in an old favorite peg on the southerly bank. The peg was facing into a North easterly that has been blowing steadily for a number of days. Not that this stopped the fish from feeding as the water was as warm as a bath! ( I actually didn't bother to test the temp but suffice to say it was warm compared to the air temp, at least double figures )

I fished artificials again on both rods with corn on the RH rod and a cluster of rubber maggots on the Left one. The RH rod was in 6ft of water, flat & with no obvious features. It is however an area I have caught in several times before taking a number of fish back in 2006. I had baited the area with plenty of groundbait, fired in with my new catty. The LH rod was in water that shelved away to the left slightly deeper, down another foot or so next to a weed bed that was slowly waking up from its winter slumber and edging it way back to the surface no doubt. I baited this area with more groundbait balls, this time they were more tightly packed - as I had now refined my aim.

After 1/2 hour or so I had and short bust of a run on the LHR but nothing developed further, and on the Right there was only a couple of bleeps that were probably caused by the wind. Steve popped round to see me about 8pm. We chatted for a while, all the time the rods remaining still. Out in the lake slowly and surely fish began to show, even rolling and tail slapping as the light levels gradually faded. Many of them were showing over my baited area.

I soon had a blistering run on the LHR I quickly struck but unfortunately it didn't connect ! This is a problem I have been having alot which I hoped I might have resolved by changing my hook pattern. I recast and was still annoyed but also encouraged by the activity at least. I had another run on the RH rod but again failed to hit the take! Shortly after Steve noticed the tip pull round a bit on the RH rod minutes later I had another run and finally managed to connect to a fish! I played it carefully in and netted a nice Tench of about 3lb odd. At last I have broken my run of blanks which has lasted exactly two months.

I had yet another missed run on the corn rod again afterwards, so I will need to look at my terminal set up again and see what I can improve ? - it's so frustrating as I should really have landed 3 or 4 fish. All the runs except one were on the corn rod.
Posted by Lee Fletcher at 9:06 pm No comments:

Things improve but no Cigar !

Tench lake again for a quick session after work. Used leadcore for the first time and managed to get two runs on the feeder and artificial corn rig but never connected ! Also missed a bite on the float set up too as I was day dreaming and didn't react quick enough.

The weather has vastly improved now with temperatures reaching the highs of 22deg C today. I didn't check the water temp today, but i'm sure it was at least 18 or 19 if not more.

Fished the same peg as in the video's in the earlier post and managed to locate the small gravel bar 25 - 30 yrds out. Found the depth in the 6 - 7 ft region.

Posted by Lee Fletcher at 10:15 pm No comments:

When will they wake up?

I fished the tench lake again for a quick afternoon session, arriving late afternoon about 5.30pm. My set up's were a waggler in the margins and a feeder rod 25 yrds out near a bar. The bait used was worm with a juicy lob on the hook and a mixture of chopped reds and brandlings in the feeder and bait dropper. There was no sign of any fish throughout the session and unsurprisingly I blanked yet again.
Towards the end of my session Barry the gate keeper dropped round, well in fact he crept up on me and made me jump when he suddenly anounced himself (the spook). He confirmed that there has still been no tench caught yet this year, and we discussed how strange it was that there was no sign of fish yet considering that the conditions were now ideal. It can only be a matter of days before the lake finally wakes from its winter slumber.

On the plus side I did get treated do a display by a barn owl that was out hunting before it was dark. It passed by within 20 metres of me which is the closest I think I have ever seen one.
Water was up to 16 deg C
Posted by Lee Fletcher at 12:27 pm No comments: