Christmas is coming and the Jacks are getting fat 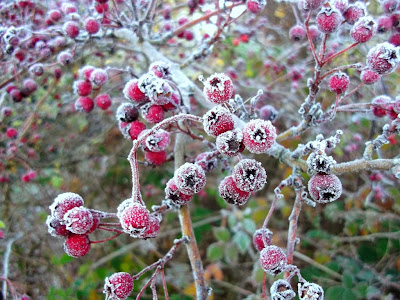 I started the morning on the canal in the same swim as last week to see if I could tempt the same fish that followed my lure in, the one I've been thinking about all week while at work. It's not massive, possibly not even a double but I so badly want to catch it now I've seen it.
Lure fishing gets you like that I have found. It has a habit of creating these little unexpected challenges and you're teased by them for a while until you either succeed or forget them and move onto the next one.   This week it was a different ball game though, where as last week I could have expected plenty of takes had my time allowed. This week all hopes of a string of taking fish were quickly quashed due to the sharp drop in temperature overnight taking the air down to minus 2 deg C.  So I arrived to a severely frosty towpath but I didn't let it deter me and tried my very best to cause something to stir from its lair. The canal water is very clear at the moment, it would be nice to think that this clarity will last throughout the winter so that I can take full advantage.

Several swims later and still no sign of a fish, I gave it up as a bad idea and moved venues to a river, although the first stretch I chose was clearly going to be a challenge too.

Finally I found somewhere else that I knew held fish and where I wouldn't have to share the stretch. I had a flick around a favourite spot expecting a take within a few casts, when this didn't happen I started to think a blank was on the cards. I eventually moved downstream and a few casts later finally had a hit from a fish.

It was then almost a fish a chuck as I went on to land 4 fish in about half an hour, all fat little jacks like peas in a pod that have obviously been feeding up hard for the cold winter ahead. 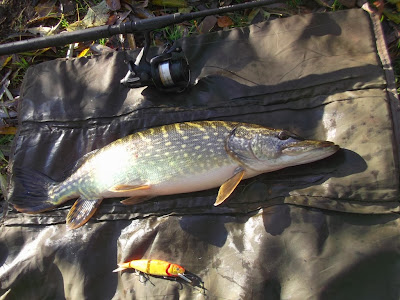 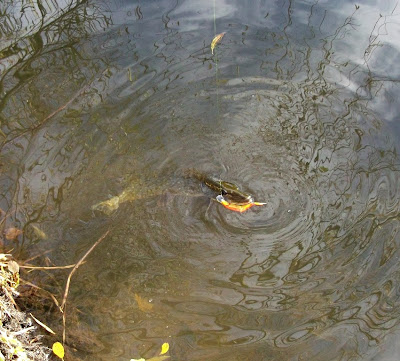 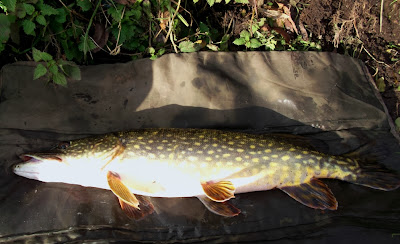 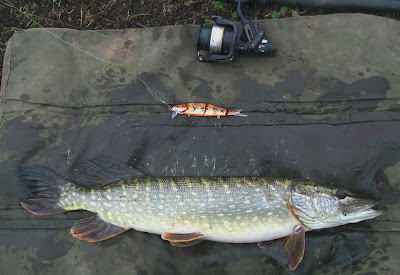 I tried a new spot up stream that I had found a little while ago. It really looks the part and I hear on the grapevine (from the match lads) that there are some larger fish to be found there.  There was nothing at home for me except for a large perch that followed the lip lure in. I tried to tempt it with a kopyto and a little size 3 spinner after but it was not seen again.
Earlier I managed to lose one of my favourite lures on a snag in mid river. The snag, an old tyre or car wheel, I managed to move slightly and felt the distinctive thud of it landing back down transmitted up the braid to my fingers.  I have hauled a couple of these in on the canal in the past and managed to get them out and retrieve my lure no problem. However on this occasion as I lifted the weight of the tyre I must have ground the braid across some rock or concrete on the bottom which sliced it through like cotton. Damn I liked that lure too - still I might be able to get it out with a tench rake next time I'm there?
Posted by Lee Fletcher at 11:57 pm No comments:

Not quite what I expected... part two

Finally the local rivers had started to show signs of clearing slightly after all the on off, on off rain that has fallen over the last few weeks. I thought about just taking a lure rod and heading further afield for a roaming session, but as I got into bed the night before the wife informed me she needed the car in the morning so I'd have to be back by around 11am. I changed plans and decided to bait fish a local stretch of river to maximise my time instead.

I got to the river around 7:15am just as the dawn light became enough to see by ( lie ins being one of the bonuses of this time of year !) and as I pondered the scene of the river from the first swim on the stretch I noticed a load of fry leaping out of the water by an overhanging tree in the next swim down. So with the swim choice sorted, I quickly unfolded the made up rods and in no time at all I was fishing.


The first take came quickly as the float across the river on the far margin suddenly disappeared with a plop. I wound down to a satisfying pull on the rod but as the fight wore on I noticed something wasn't quite right. Seeing a glimpse of the fish mid river it looked quite silvery, could just be a pale pike I suppose, but then it surfaced in front of me and turned into a pretty big chub. Now I've caught a quite few chub over 4lb in my time and at least one over 5 before so I was quite excited to find out how big this one would go. It's been a while since I targeted chub so I might need to get my eye back in but I couldn't help thinking if it was over the magic 5 ? it was certainly a good four plusser.

﻿﻿ Unfortunately I will never know as I must have lost my scales on the last trip out ! They are one of those items that are always in your bag quietly waiting to be called into action. So when you discover they are no longer there it's a bit annoying to say the least.  Still, there was nothing I could do about it now so I took a few photos and tried to console myself by the fact that it was an accidental capture (it took half a mackerel on trebles  !)  so could never have as much satisfaction as one caught by design anyway. Also I now know where they live so I can always come back with the feeder rod to see what its shoal mates are like. 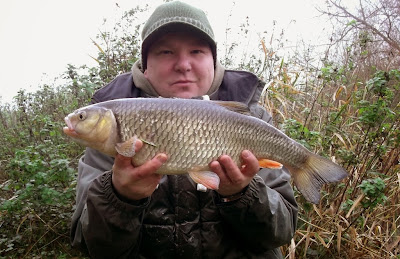 Eventually after no more signs of activity I gave up on the bait fishing and headed to the canal on my way home to throw a few lures before I had to be back.  The canal, still as clear as last week, was looking good and I landed a jack pretty much first cast on a liplure and had an exciting cat and mouse game with a much larger fish that followed the lure in but cautiously refused to take it. I wafted the lure around beneath my feet and could clearly see the fish hovering just behind. To be honest I ran out of ideas and as the stalemate continued for a few more seconds, I even considered letting the lure drop to the deck to see if it would pick it up.  While I was busy hesitating the moment had gone and the fish melted away, not to be seen again.  Then a text alerted me to the fact that I was now pushing it time wise when the wife sent me one of her gentle reminders (bless her).  So I had to leave it there even though I knew I could have easily winkled a few more fish out given another hour. 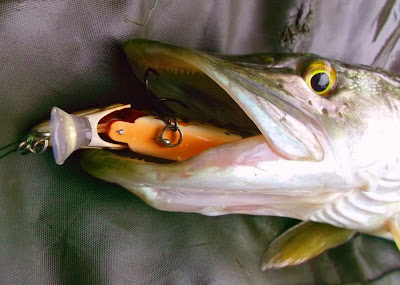 Well I wasn't expecting that !


A 5lb canal zander on a sardine meant for pike! 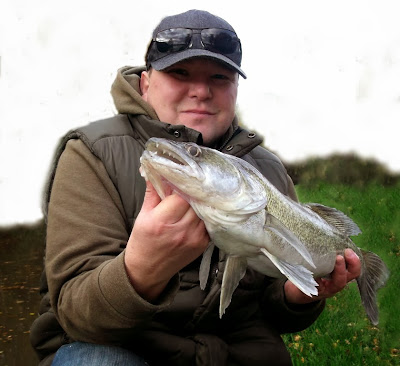 ﻿
The canal was the clearest I have seen it in many a month, but I still struggled to get any interest on the lure rod.  I think something nipped at an orka shad tail once but that was it. Having a bait rod in the water too wasn't really helping though, as I was constantly flicking my gaze to the float (despite having it set up on drop off and alarm too).

I started a short three hour session at a different part of the cut, the water appearing even clearer still here, but this didn't make any difference to my results and after an hour had passed I had no fish to show for my efforts apart from the slight nip on the lure.  I was soon upping sticks and heading back to the usual banker swim.
Once there the bait rod was positioned  opposite along a reed bed before the lure rod was put back into action. In between retrieves of the lure.  I kept twitching the bait rod sporting a headless sardine back every so often until it was time to re cast it again. The second cast out was positioned further away so I could spend longer twitching the bait back along the reeds in hope of triggering some kind of response. I'd only managed one more retrieve on the lure rod, when I saw the float suddenly bob I waited till it moved again a couple of seconds later, picked up the float rod and struck.

Fish on, and after a short but steady fight on heavy pike tackle it was neatly chinned out because of the way the trebles were positioned, one flying outside and the other firmly in the scissors. The first zander I've ever seen take, let alone caught on a sea bait was the result. It shouldn't really be a huge surprise as there have been quite a few sea baits going into this area over the years, not only from me but from all the other pike anglers that have frequented this area.
Strange as it was, I still got that little "it's a zander " buzz you get when see the fish pop to the surface, and not a bad one for the cut either.