I post a bit on face book these days and have a "This Angling Life" face book page. It's far easier to use than blogger  especially on a mobile or tablet. Check it out sometime. 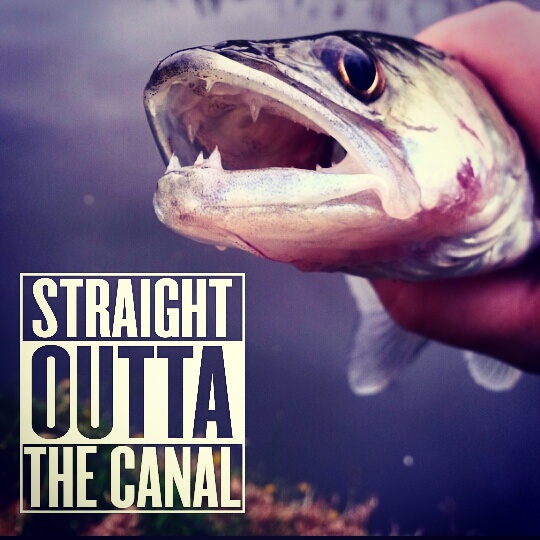 Posted by Lee Fletcher at 11:37 pm No comments:

Here's a few challenge points photos of some recent fish. A Very modest campaign this year so far compared to the rest of the field but I'll be happy as an alsoran if I can finish with one or two nice fish. That's the excuses out the way - here's a selection of my results to date. 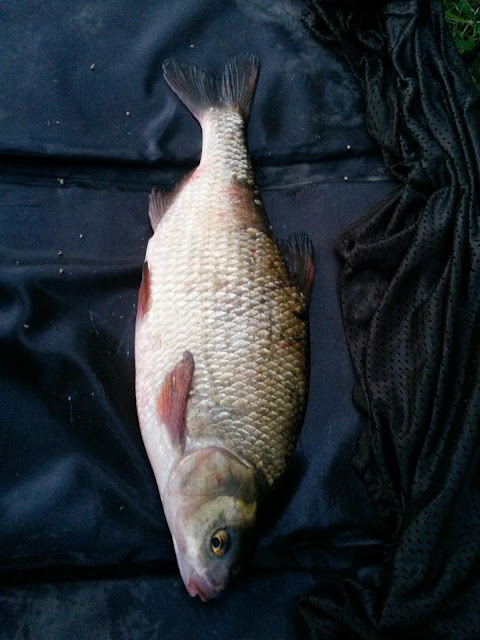 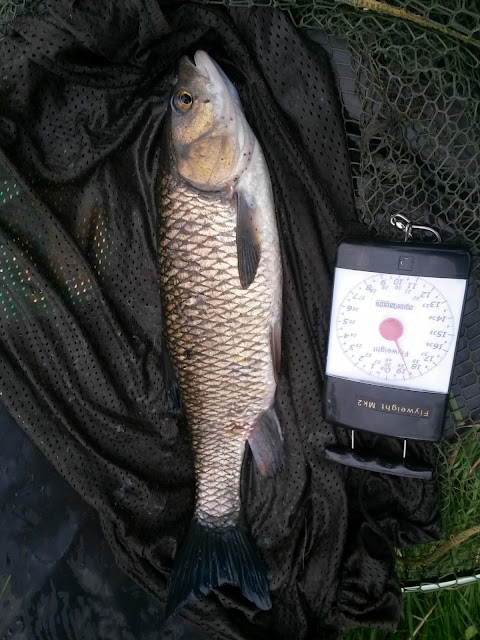 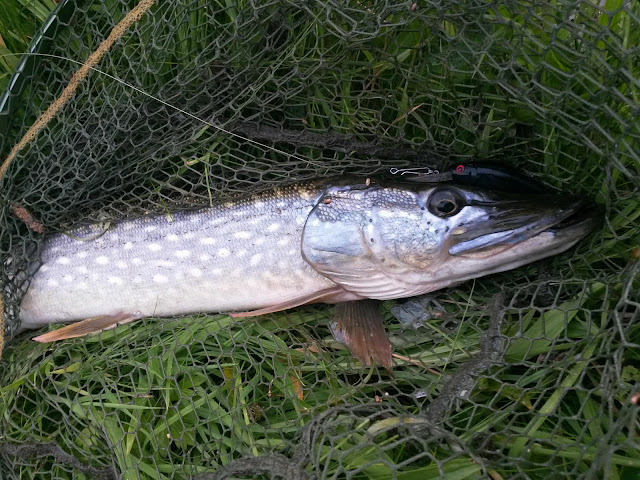 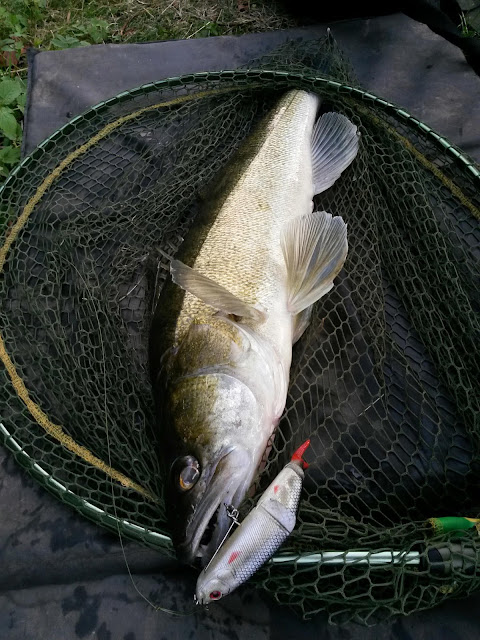 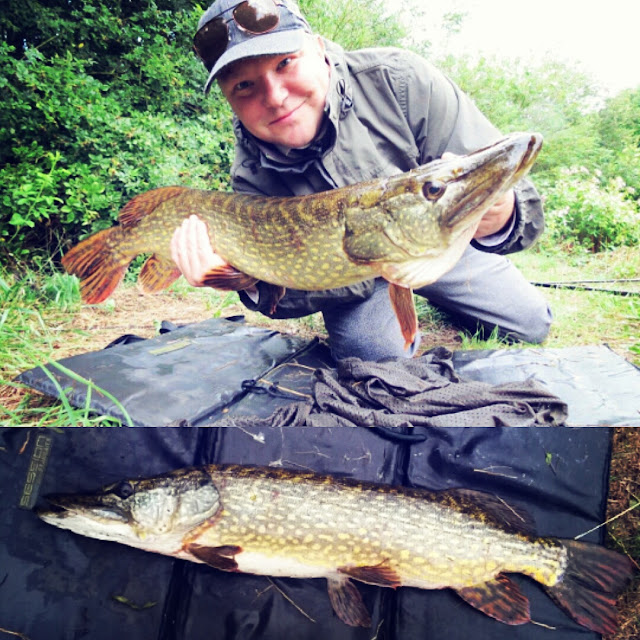 Posted by Lee Fletcher at 8:14 am No comments:

Since staying on the coast a few years ago I have been aware of Smoothhound. Whenever I visit the sea, like most anglers I expect our first thoughts are biased toward the fishing available in the area and what we can expect to catch ? The fishing pages mentioned smoothhound and that they would be running throughout the summer along the beaches where I would be staying, great  that's an easy one then.  Well you would think so but it's not so simple when you have to learn all about a new species and the methods and techniques needed to successfully target them.

Back then there were only a few pages on line that explained how to catch them and most seemed to insist on using  peeler crab, either freshly caught being better or frozen if not. The problem I found is that you need to either gather them yourself, not as easy to find on great expansive barren sandy beaches as they are down south in the secluded  rocky coves under racks of bladder weed. Alternatively you can pre order from the local tackle shops but I could never guarantee when I would be able to go fishing and had no way of storing frozen bait. Also at £5 for about 4 or 5 they are costly  To counter this I decided to try another option and use Lug worm which seemed to be more readily available shop bought, I even bought a £20 worm pump so I could hunt for my own on the beaches that seemed to be covered in them at low tide. This handful of attempts over a small series of visits to the area sadly bore no fruit and the idea kind of hit the back burner when I discovered there were some nice rivers,  drains and pools available to explore with my new forming passion for lure fishing.

This year however I thought about giving it another go as we would be visiting the area some more this year. Coincidentally some of the lads on a FB group I post on came up with a plan to have a go for smoothhound too and would be meeting near to where I stay.  I jumped at the kind offer to tag along and see what we could collectively come up with.

Meeting at Phil's house ( the host of the event)  just before eight in the morning, we were soon all gathered in his back garden discussing tactics and dividing up the packets of bait. After a hearty breakfast scoffed eagerly by six of us provided by Phil and expertly cooked by his better half we were soon heading to the beach, stopping off on the way to pick up some peeler crab and black lug worm from the bait man in the village. Shortly we were spread out in a line along the beach to Phil's lead.

The action began pretty quickly when the yell came from up the beach as Phil rod drew first blood with a small pup. I don't think it was long before Andy landed the next.  Not sure if I was next or if it was Dave but soon 4 of us had caught our target.


﻿
Chuffed with my early result of a small starry pup,  I was soon belting out the lead again to a comfortable 70 yards or more. I missed  another rod wrapping bite but confidence remained high.
Dave caught another fish, a bigger one this time that attracted an audience as we all gathered to see what he was bending into. Best fish so far. 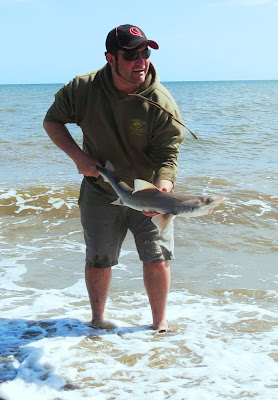 Leo and Phil K were getting a little frustrated by now, being surrounded by others who had all landed fish but not able to get any bites themselves. Leo remarked that he would try the black lugworm  for a better chance of  a fish, any fish would do, but he was sure that it would not be a smoothhound  that would take it.  Not 10 minutes later and he eating his words as he was bending into a good un.  I was on hand to tail out the fish of the day for him,  and what a cracking example it was too. Not a giant to the experienced sure,  but to us novices it was still pretty impressive non the less. 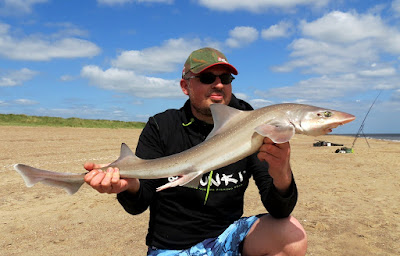 That was the end of the action for the day aside from a few dabs and flounder caught,  and the strange story behind the small thornback ray the was landed by Dave and Phil in a mixed up tangle of lines.
Fast forward a week and I was back down with the family for the weekend. The tides were not peaking at the best of times for me but I decided to go for the early start on the Sunday morning for a 5:00am kick off. Phil commented on FB that he would be there too so I aimed to get up at 4:30am to meet up. As I walked over the brow of the sand dune I was greeted by a calm sea and the sight of Phil bending into a fish already ! I thought he might just be dramatically reeling in a lump of weed but no the kick on the rod tip gave away the culprit. I was soon taking the photos for his new PB.  Quickly setting up and casting out my bait I was all set for the rod to hoop over any second. many seconds later I was still waiting as Phil was into another not more than 30 yards away from where I stood. Springing in ghillie action, I tailed his second fish and PB of the day. 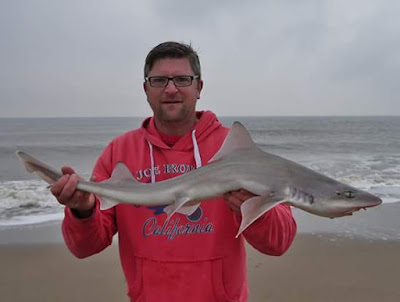 As the fish was returned I noticed Phils second rod tapping away and shortly another pup was drawn up to the beach and quickly returned. A little over a week ago we would have both been gobsmacked at it.... now it was put back without a second  thought like so many a jack or  a schoolie zed ... such is the nature of progress.
In case your thinking well did he blank, yeah you'd be right, no rhyme, no reason that's fishing. I'll say this though, it was still worth the early rise to see those fish and re-affirm the tactics. Time fishing is never wasted  someone once said ........... till next time.
Oh and finally here's the 6lb carp I caught for the bloggers challenge points.. could do with feeding it a sack of pellets (its a joke..). 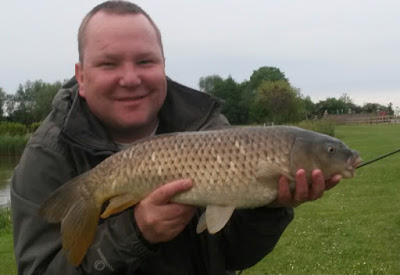